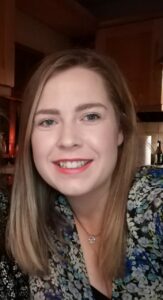 Where are you from? Esker, Co. Galway

When and how did you first get involved with Kevin’s? Can you remember your first experience? I had known about Kevin’s as I have some relations in the club (Brian and Brian Óg Flannery, Kevin and Ita). When I moved up to Dublin about 4 years ago, I was contacted by Jenny Kearns to see if I wanted to start playing camogie up here. I hadn’t picked up a stick in about a year but decided that it would be a good opportunity to meet some more people. I only made the end of a training session after driving all around Dolphins Barn looking for the pitch! The next Thursday the girls were playing a match and I came down to watch. I heard my name being shouted from the side-line and was approached by Amanda looking for me to play because they were short numbers. I couldn’t say no. I was given a skort and just got out on the pitch before the whistle blew. I’ve been with the club ever since.

Have you developed a Dublin accent since getting involved with Kevin’s? I don’t think I have but I defiantly have picked up a few Dublin phrases. There’s lots of country girls on the team so I’m not completely submerged in the accent.

What’s it like for a country girl teaching in an inner-city school? Most of my teaching experience to date has been in city schools. When I went to primary school, there were 8 children in my class which is a big contrast to some of the big schools in Dublin who could have 4 groups of each class. St. Catherine’s is a small school with a close school community, so it resembles some country schools I have worked in. I really enjoy the buzz of city schools, but I have to say I miss is having a big field to play in beside the school. Unfortunately, space is something that I found to be lacking in city schools.

An interesting fact about yourself (or one that people are not likely to believe): I love travelling. I’ve worked in summer camps abroad. It’s rare you would find me at home during the midterm or summer holidays.

Do you play other sports? No, camogie has always been the only sport.

Biggest sporting achievement to date: Being able to pass on the skills and encourage young children to play hurling and camogie. I have been delighted to be able to coach the school team since joining St. Catherine’s in 2017. I’m also pretty proud of abseiling down the side of Croke Park with the club in 2018 because I’m not great with heights!

Biggest influence on your “career”: Although I had only known her a short while, the late Sarah Carty was one of the most inspirational people I have ever met. I have very fond memories of chatting her on cold winter mornings in the Pheonix Park where we might have had only 10 up training. Her dedication and outlook on life were remarkable. As someone who never shied away when times got tough, both on and off the field, she truly inspired us to give our all and live every moment to its fullest. She made me appreciate being part of an amazing team and getting to play the great game of camogie.

What position do you play/ What’s your favourite position?

I played in backs all my life, usually in corner back. Two years ago we had some major position changes on the team and much to my surprise I was sent up the other end of the pitch to have a go at forwards. I can’t say I was much of a scorer but I soon got used to looking for the ball and trying to make some runs and passes.

Club honours: We’ve been working our way up to a championship final win the past few years but haven’t made it over the line just yet. Last year we were heartbroken to lose the final against Crumlin. We missed out on winning the league last year but were delighted to get a win in our last game against St. Pats. We have won the shield (Sheila) the past few years.

What do you enjoy most about your involvement in the club? The club for me is like a home away from home. I’ve gotten to know so many people over the past few years, many of whom have become good friends. There’s a great sense of community amongst the members. I also enjoy the social aspect of being part of the club. There are always events on the calendar from fundraising days to table quizzes and nights out. Being part of the camogie team is a great motivator to stay fit and healthy, while having a bit of craic.

Biggest Club Legend: Mary Moore. I first met Mary through the camogie team when I joined, and she was always great for a chat. She’s such a character! She is a great supporter of the team and is always there in the background driving us on.  I’ve also heard some brilliant stories about her time as a player.

Most dedicated club player: I would have to say this is a toss up between Jenny Kearns and Claire Graham. They both do so much for camogie in Kevin’s and their dedication and commitment to the team is second to none. They have both played role as captain over the past few years and dealt with so much on behalf of the team.

Biggest messer on the team: There’s never a dull moment when Shannon and Kelsey are around!

Who has the last word before a game? Claire and Ais Touhy always have some last-minute words of encouragement for everyone.

Toughest player to play against: Not a player but there’s always a battle when we play our rivals Crumlin.

Favourite opposition pitch: Naomh Ofal’s pitches are usually well kept and I have some memories of getting wins there.

Best, or favourite game you have ever played in: I really enjoyed playing in the 7’s matches during the summer of 2018. They’re great for having the craic and playing a bit of light-hearted camogie.

Favourite Quote: ‘Sometimes you win, sometimes you learn’. I think attitude and mentality are huge parts of playing sport.

Favourite Athlete / Sports Personality: I really enjoy seeing the Galway camogie team in action. Growing up we would go and watch them play.