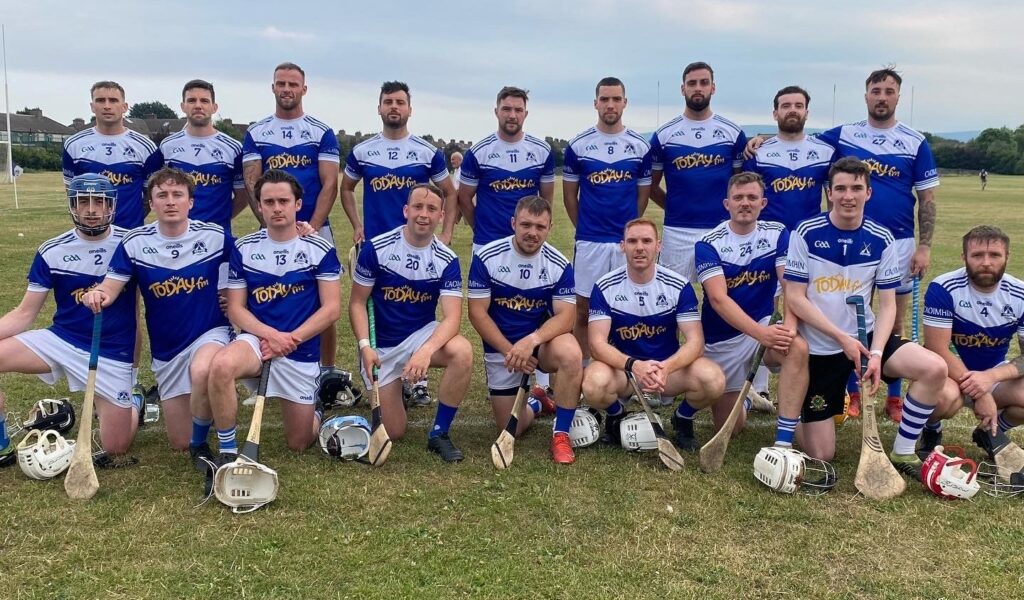 Our first team had a good result in their opening round of the Junior A Championship on Tuesday night. Playing with the breeze Kevin’s got off to a slow start. Cuala introduced a sweeper system from the throw in, which seemed to give them the advantage in defence and they racked up a few points to put them ahead. After a number  of missed chances, a Brian Og Flannery point eventually got the home side going. As Kevin’s were edging back into the game Kevin’s grabbed a crucial goal to put us ahead 1-6 to 0-8 at half time. Kevin’s had a much better start to the second half, but a goal from Cuala had the visitors leading by a point with only a few minutes left on the clock. Dean Moore put in a tenacious performance at corner back and set up a number of attacks with his clearances and Kevin’s levelled from a free. The next few minutes were critical and every ball won was hard fought for. Our veteran half forward line put in a hard shift winning balls and chasing down the Cuala defence to ensure balls weren’t cleared. As Kevin’s piled on the pressure David Reid was unlucky not to grab a goal, however, a critical move near the end was when Brian Moulds put in 3 critical blocks (2 of which appeared to be with his backside) on what should have been a certain clearance spurned on the home side. This determination most certainly allowed us to slip over 2 points to earn the win. Well done all in what was an entertaining game. Also well done to the referee who had a good consistent game throughout. The next game is an away fixture on the 24th July, but it’s a local derby with neighbours Good Counsel / Liffey Gaels . Our neighbours have also had a good start beating Skerries Harps, so this tie should prove to be another tough challenge. To follow the Junior A’s progress click on this link for the group tables and fixtures.

Our adult camogie side will be competing in the Intermediate 2 championship this year. The girls get their campaign started on 14th August with an away game versus Lucan Sarsfields. The girls have had mixed fortunes in this championship reaching the final 2 years ago, but not making it out of the group stages last season.

In adult rounders news our Mixed Intermediate side play their last group game on Sunday versus Athenry at 3.30 pm in Galway. Yes you read that correctly! We will be bringing a transistor radio and tuning into the All-Ireland Football Final old school! There are 2 Intermediate Mixed groups made up of 6 teams each. Last years beaten semi-finalists Cork have already qualified from our group, as they are unbeaten this year. The game on Sunday may decide who goes through with Cork. If Kevin’s win we will go through as second placed. If we loose or draw we will have to await the result of the game between Athenry and Glynn Barntown. To follow the Intermediate Mixed squads progress click on this link for the group tables. Our Junior Ladies team also have one game left against Castletown Liam Mellows and are in a very strong position to top their group after last Sundays unbelievable performance against Glynn Barntown of Wexford. This team is made up of a combination of existing camogie players and some girls who play softball which is proving to be a lethal combination so far. To follow the Junior Ladies squads progress click on this link for the group tables.

Monday’s jackpot will be €2,300. You can play online up to 7pm using the secure Clubforce link by clicking here. All funds raised go towards the running of our many club activities.