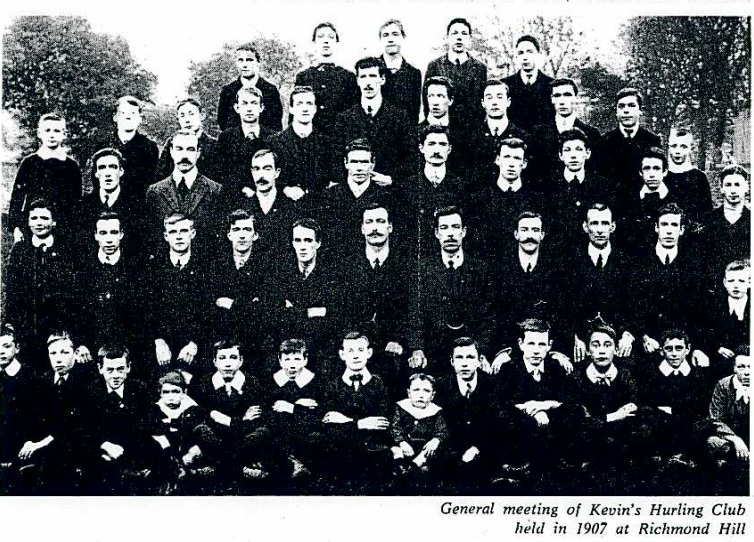 Kevin’s are 120 years old today … and still going strong! We have over 800 members and play hurling, camogie and rounders. We also have healthy club activities and encourage handball when time permits. Looking back you would wonder if the founding members ever thought the club would be going so well 120 years later. So what about the earlier years?

The Evening Herald noted on Saturday November 22nd that “St Kevin’s H.C. were in the process of formation” and that the first training session would be held near the Polo Grounds on the same day. Gaelic League members and the students of C.B.S. Synge Street school were central to the establishment of the club. While better known for their involvement in the Rathmines and Faughs clubs, the Boland brothers and specifically Gerald Boland was very involved in establishing the club. The first known A.G.M. was held in June 1903 on 28 Wexford Street which was the Boland’s mothers shop. In her witness statement, Gerald Boland’s sister refers to her brother involvement in the Gaelic League and the fact that he set up a hurling club in his mother’s kitchen. The committee of the day included M. Bannon (Presiding), P. Bannon (Chairman), F. Jordon (Secretary), C. Kickham (Treasurer), J. O’Neill (Captain), J. Dunne (Vice Captain) and committee members, J. Dunne, J. Cahill and J. Maguire.

Newspaper records show that Kevin’s entered into junior and minor hurling competitions in 1903. While originally established as a hurling club, Kevin’s would soon expand and it was in fact a football trophy – the Saturday Football League in 1906/07 – that would be Kevin’s first title. A hurling title would soon follow and Kevin’s were playing senior hurling by 1911. While the current Camogie section was established in 1993, Kevin’s did establish a camogie team in 1906 and played a leading role in the establishment of camogie throughout the county. Kevin’s also promoted handball in their earlier years, although little details are known at this point.

If you’d like to know more about the clubs history check out our history page here and our roll of honour here. We also have a recording of an Interview on RTE 1 Radio with William “Leggy” Kavanagh who played for the club in the 1920s. Click here to listen.

If you have a picture, story, or would like to research the clubs history please email pro.kevins.dublin@gaa.ie