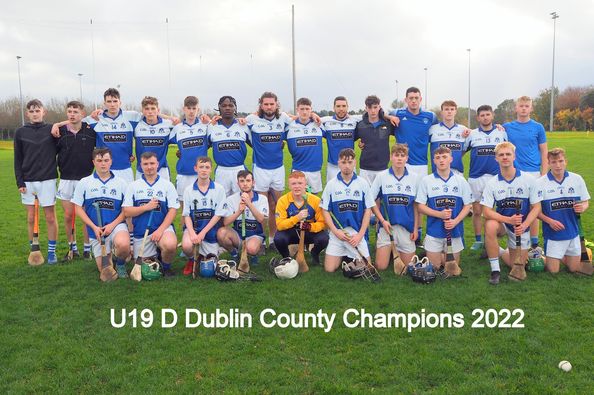 With Kevins having been defeated last year by just 2 points by Clan Na Gael in the Under 18 county final, this was always set up to be a mouth-watering final and it didn’t disappoint.

Clan were out of the blocks early picking off three quick points in succession, followed by a well taken goal. Many teams might have dropped their heads in such circumstances but there was a steeliness beginning to emerge from this this Kevins team to give their large group of travelling supporters a glimmer of hope. Eamonn Redmond led the charge with a quickly well taken point from play and then followed that with a  mesmerizing goal where his speed sliced open the Clan defence and he rattled the top of the net with a superb finish. GAME ON!!!

Both teams traded blows for the next twenty minutes. Playing against a heavy breeze Paul McManus and Paul Crampton played a master stroke from the side-line, dropping Dan O’Loughlin in behind the half backline where he was resolute with the rest of the backline in deterring wave after wave of Clan attack. With a swift break and a slick passing movement out of defence Padraic O’Mahony tagged on a wonderful point from play before turning provided to his cousin Barra who rattled the Clan net for the second time, giving Kevins the slimmest of margins going into the break with a 2-5 to 1-7 lead.

Redmond continued where he left off in the first half with two more points but CNG were not giving up without a fight and responded with a few well taken points of their own before a wonderfully worked goal saw Eoin Tracey bury an unstoppable shot past the Clan goal keeper. McKeever was raining missiles down on the Clan defence with his superbly placed puck outs to help keep CNG pinned back. Kevins had a strong bench and unloaded it in the last 15 minutes to give the warriors who had all played so brilliantly a well-deserved rest.  Points from frees continued to be traded by both teams and Redmond stood tall and didn’t blink under pressure on the dead ball, and when substitute Tom Crampton sped through the Clan  defence like a bolt of lightning, side stepping two defenders, to slot the ball over the bar the large travelling support went into a frenzy. One hand on the trophy!  The ecstasy was short lived as Clan dug deep again and struck a rebounded free to the back of the net to leave one point between the teams with three minutes of ordinary time to go.

With another three minutes of extra time added by the referee, these six minutes felt like six long days for those on the side-lines. It was then that the sixteenth man really kicked in with the Kevins supporters on the line rising and bellowing to every clearance as the defence stood tall. With the final whistle blowing there were tears of joy and relief to be seen coming from mothers, fathers, brothers, sisters and even a few of the fans that were fortunate enough to have been there to witness the now ever infamous  “Thriller In The Ringer”.

Many thanks to Eoghan Redmond for the photos. Check out the gallery here.