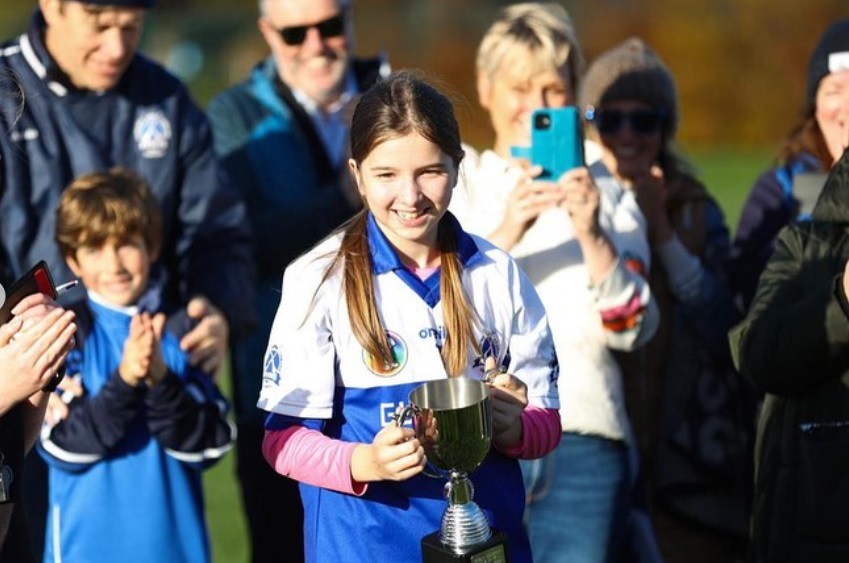 The weather was very good and the sun shining in Greenhills as the ball was thrown in at the start of the U13 Championship Final with St Jude’s.  We started the fastest, and after one skirmish at our goalmouth capably managed by our goalkeeper the clearance and some subsequent chances were turned into a few goals and some points in the first quarter for us.  That created a challenge for St Jude’s which any team would have to work hard to recover.  Our team maintained the pressure ending the first half 5-6 to 0-1.  At this stage we were motoring well.  Our player marking at midfield was working very well and the half back line was winning battles clearing with long striking and good solo running. The half forward line kept the ball moving freely to the inside line and also stopped a number of attacks from St Jude’s that were building from short puckouts to their half backs.  The full forward line took many chances coming their way and it was very efficient first half performance.

An early second half goal by St Jude’s gave strong indication that they posed a threat to our lead and our full back line had to be even more alert.  After that score our entire backline turned in a near watertight second half, clearing incoming attacks.  Our midfield and forwards added more pressure and we were rewarded with a few more goals and points and finished the second half strongly.  Overall it was a fantastic achievement with great skills exhibited, and obvious determination, bravery and scoring from play and frees by our girls.  Afterwards the referee who was very fair throughout commended the teams highly.  She handed the cup to our Captain Skye who lifted in in the air to a rousing cheer and presented the player of the match to Lucy our top scorer yesterday.

There was a really great crowd of Kevins supporters at the game in Greenhills and that support is so important to our young players to show they are valued and cherished and it encourages them to greater efforts. A really special word of thanks to the many supporters who turned up some who perhaps did not have a direct family connection to the girls playing but are true blue.

There are some great photos from the game. Thanks to @kennethohalloran for the photos and also to @element_postproduction for the sponsorship.  Click here for the Instagram post with pictures! #VillageInTheCity #CaoimhínAbú

Finally, many thanks to Ger Reilly with the regular updates for our social media and club website.