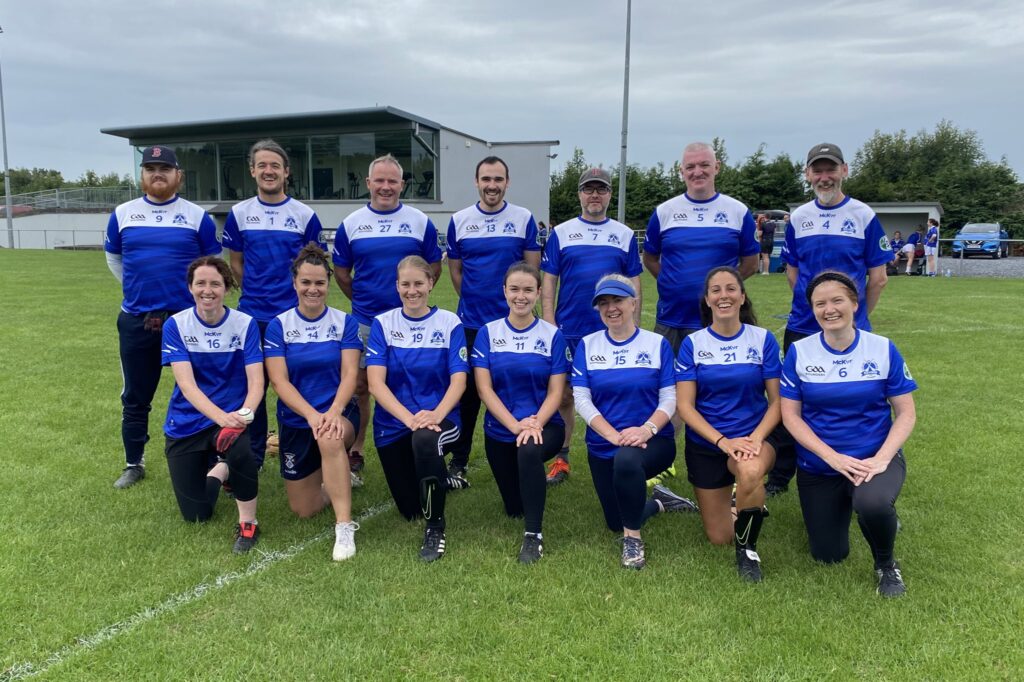 It was a busy Sunday with what must be a record number of club adult teams fixed for for championship action yesterday, as our hurlers, camogs and rounders squads were all out on the field.

The morning started with with mixed results. The Junior A hurlers had a good win against Skerries Harps on a scoreline of 3-14 to 2-13. While the margin was tight this puts Kevins in a good position to take a quarter final spot, but they will need to beat St Marks on the 11th September to guarantee a place in the knock-out stages. It will be a tough task to beat them in their home ground in Tallaght, so support is welcome. To follow the Junior A’s progress click on this link for the group tables and fixtures. The Intermediate camogie squad were at home against a strong St Maurs and lost. Their next game is away to Castleknock on the 11th September. After the disappointment of loosing the camogie fixture, 4 girls jumped in a car and drove to Bunbrosna in Westmeath to tog out with the Ladies Junior Rounders team who were playing in their first ever All-Ireland semi-final.

There were two GAA Rounders All-Ireland semi-finals fixed for Bunbrosna in Westmeath. First up were the Mixed Intermediate team who formed in 2019 after a social gathering. This squad has shown lots of potential over the last 3 years, but that little bit of  experience has seen them being pipped at the post in a few crucial games. They had started their season with a loss against group winner Cork, but with a few positional switches they recovered in style to take second spot and make the All-Ireland semi-finals for the first time ever. On Sunday they were up against the legendary Erne Eagles of Cavan. They were group winners from the other side of the competition and had a number of experienced players from the senior competition. Kevins won the toss and decided to field first and holding the Cavan outfit to one run. Katie Glynn and Erica Meslin got home in the bottom of the 1st innings to make it 2-1. Fortunes were reversed in the 2nd innings, as the Eagles fielded impressively and took the lead 3-2.  As the game entered the 3rd innings it was clear that this would be a battle of the fielders and both Wayne Cullen and the Eagles bowler Karl Dolan were pitching at pace. As the Cavan outfit gained some momentum, Shane Sheridan sent a monster shot to the right outfield which was looking like a certain Home Run, but up popped Dermot Donnellan to make an unbelievable one handed catch in a move that combined a ballerina pirouette with the hand of Galway hurler to end the innings. Kevins held the Eagles to 2 and notched up 4, pushing us ahead ever so slightly. Wayne Cullen’s pitching was making life very hard for the batters and managed to catch a high ball himself in the 4th. Not to be outdone by Dermot, Fergal Kelly in left outfield was also catching some great hits, which wasn’t leaving the Eagles batters with many options. Kevins were ahead going into the bottom of the 4th and as the runs started to notch up, Dermot Donnellan hit a massive ball outfield and out of the field. It was a certain home run, only for it ricocheted off the concrete terrace and back into the field of play. However, Dermot gained a few bases and got runners home which was a big morale boost to the Dubs. The game was beginning to slip away from Erne Eagles, but they gained some momentum in the 5th. Shane Sheridan from the Cavan squad hit a similar shot to Dermot’s, but instead of the hitting the stands his ball hit the nets and bounced back into play. They managed to keep Kevins to one run and put 2 on the board themselves which gave them a boost, but when the Eagles bowler pulled up with a hamstring injury in the 5th, it was advantage Kevins. The Eagles were fired up going into the 6th. A massive hit down left outfield from the Eagles batter was followed by a roar of excitement as it was heading for Home Run territory once again, but then the spritely Fergal Kelly appeared out of nowhere with his customary sliding catch killing any momentum. As we entered the 7th innings Erne Eagles needed 6 runs to stay in the game. the Eagles managed to land 2 runs, when Serena Scott ended the game by catching the batter out on 1st base as the Cavan team secured one more run. The game ended 16-13 and Kevins had a bat to spare. Scores by innings: 1-2, 2-0 (3-2), 2-4 (5-6), 2-6 (7-12), 2-1 (9-13), 1-3 (10-16), 3-X (13-16). Kevins runs were scored by Wayne Cullen 4, Fergal Kelly and Erica Meslin 3, Dermot Donnellan 2, Katie Glynn, Serena Scott, Jack Shallow and Aidan Lynskey 1.

Next up were the Ladies who were in their first year of competition and entered the Junior championship. The girls topped their group going unbeaten and were playing Carrickmacross Emmetts from Monaghan who were 2nd placed in their group. The Carrick girls were also in their first year, but were less experienced as unlike some of our girls they had not being playing Mixed. The Kevins fielding was once again on form and the girls showed their experience throughout with smart base running. While the game ended 32-3, it was mainly due to Kevins having a very good 1st and 3rd innings. However, the rest were well balanced as Carrick settled into the game with some good fielding. We now face St Clares of Cavan in both the Intermediate Mixed and Ladies finals. We anticipate a tough outing in both games, as St Clare’s themselves are former senior champions who returned to the sport 2 years ago having had a long lay off.

Sadly our Junior C championship tie against Faughs was postponed due to a family bereavement. The club wishes to extend our sympathies to Robbie Purcell and family on the recent passing of Robbie’s father Christy.

Our Junior G’s were in action and have continued their steady progress. Clontarf lead by 3 points in St Annes Park, but with time running out Kevins managed to eek out a result with a last minute goal followed by a winning point from Englishman Alex Banebridge. The little bit of youth certainly made a a difference to the team, but overall Man of the Match went to Conor Bracken who won an Intermediate Championship with Kevins in 2002.

It wasn’t all championship this week-end. On Saturday our Go Games hurlers returned to the field of play with teams travelling the length and breath of the county to hurl. The day was topped off by 2 really good wins for both Under 12 hurling teams who defeated Na Fianna and St Sylvesters. It was a nice start for our boys who return to school this week!

Tonight’s lotto jackpot will be €2,800 and will be held in the Harold House. You can play online up to 7pm using the secure Clubforce link by clicking here. All funds raised go towards the running of our many club activities. Finally, if you have a match report, or Kevin’s related story you can email pro.kevins.dublin@gaa.ie!