A Championship First for Adult Rounders 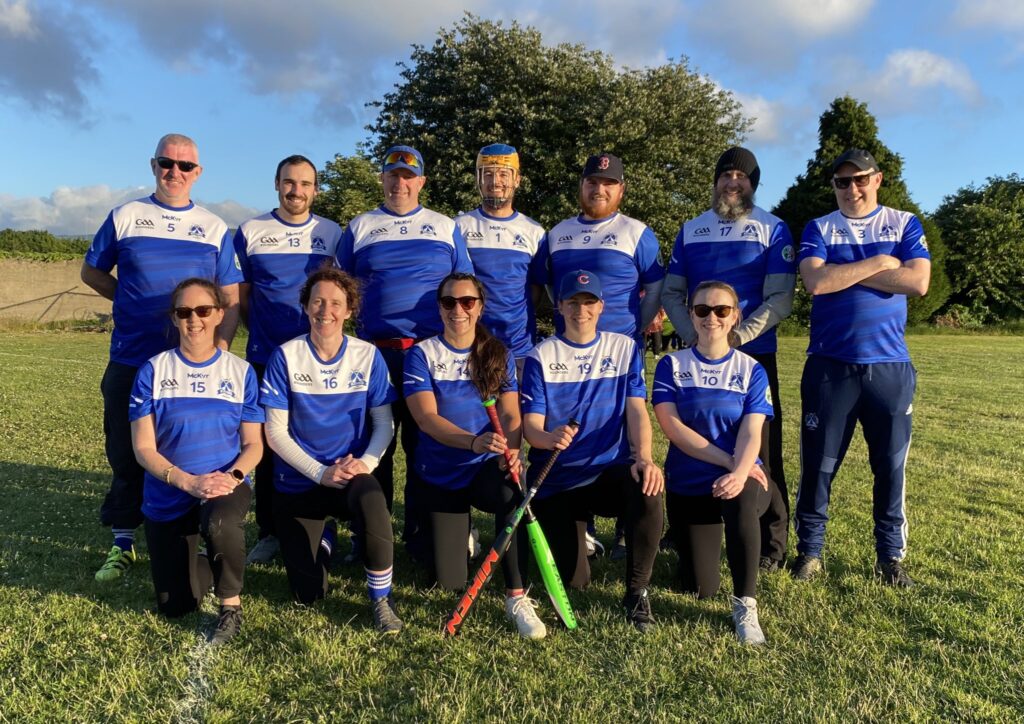 Kevin’s versus Na Fianna has been an annual fixture since we established GAA Rounders back in 2019 and while we’ve come close on a number of occasions, our good friends from the northside have had the edge since day one. We did manage to beat Na Fianna in the inaugural Dublin Social Rounders Winter League, but we have never beaten them in Championship. To make matters worse, we suffered defeat to Cork in May and haven’t had a championship fixture since.

It was therefore no surprise that we got off to a nervous start. We lost the toss and Na Fianna chose to bat first. With the legendary Ronan Gately bowling fast balls, we managed only one run from Katie Glynn, who herself just about managed to get onto first base on her last ball. Na Fianna then ran in four runs putting them ahead 4-1 going into the second innings.

After a deep breath, Brian Connolly stepped up first to bat in the second innings. Brian steadied the ship with a good bat. Then Adrian and Serena Scott followed and the runs started to come in. We had 7 on the board before Na Fianna’s Centre Outfield caught our first batter out, but as Na Fianna seemed to halt Kevin’s momentum the batting order returned to Brian, who stepped up once again. This time Brian blasted the sliothar through the outfielders and bagged himself a Home Run. As the Na Fianna outfielders searched frantically for the ball by the fencing over 100m away, Brian was high fiving and fist bumping the Kevins side line. We’ve been playing a few years now and haven’t seen a belter like this before. Kevin’s racked up 13 runs in total before the turnaround. Na Fianna returned with 4 runs until Katie Glynn grabbed a double out by catching the ball from from the batter and tagging 2nd base as the Na Fianna runner was en route. This gave us a 14-9 lead at the end of the second innings. While the game was very much in the mix, it was clear that Na Fianna’s confidence had been dented.

Na Fianna made some changes to their fielding and switched bowlers, but Kevin’s built on their previous innings with the first 5 batters getting home and Aidan Lynskey grabbing another Home Run. Mike Lang on 1st base for Na Fianna halted our momentum by tagging two batters out, but then Katie Glynn stepped up and hit a cracking shot which floated over the tips of the Centre Outfielders fingers in the most agonising way allowing her time to get our third Home Run of the night. While the batters were on fire it was our fielding in the third inning that killed off any hope of a recovery. Three bats and three catches raised the roof! First Aidan Lynskey caught Mairead Varley out from a ball that landed infield. Then Serena Scott caught a ball in dramatic fashion from her position on First Base. Not to be outdone by his better half, Adrian Scott then caught a whopper of a bat to make it a hattrick of outs. The side line gasped as the high ball popped out of his hands on initial contact and watched Adrian recover to hold onto the sliothar the second time as it was heading towards the ground. We were now 23-9 ahead at the end of the third innings.

Kevin’s put another 4 runs on the board including one from newcomer and hipster Anthony O’Grady, who wouldn’t have looked out of place telling stories by the side of a big turf fire. Buoyed on by his teammates, the Roscommon Rocket Wayne Cullen was bowling faster and faster every innings and much to the batters frustration the balls were been sprayed in high, low, left and right. At one stage catcher Merilin Neiland called for a change of gloves and referee Chris Hughes considered changing his rain pauncho for a bullet proof jacket. As Na Fianna’s stepped up to bat Jack Shallow leaped like a ballerina and made a magnificent one handed catch. Jack himself had  been caught out on bat by a brilliant catch by Ronan Gately earlier so this one must have given him great pleasure. Kevin’s caught Na Fianna out for zero once again ending the fourth innings 27-9.

As we entered the fifth innings, referee Chris Hughes called for a ‘bat on’ which meant Na Fianna had to continue batting to see if they could reach Kevin’s lead. If they couldn’t then the game was over. Merilin Neiland caught the first batter out. The second batter fouled on their third good ball. Na Fianna got 2 runs before Merilin Neiland and Serena Scott teamed up to tag the runner before getting to first base which ended the game 27-11.

It was a difficult game to pick a player of the game as both batting and fielding was superb on the night. While she didn’t get a Home Run, Serena Scott was most consistent throughout the game. In the first innings when we were under pressure Serena made a vital block to halt the Na Fianna runners which helped restrict their runs to 4. Her batting was good throughout getting two runners home on occasion. She was the highest scoring player on the night, despite being 9th in the batting order. While her dramatic “will she won’t she?” catch in the 3rd innings was very entertaining, she has been awarded player of the game for inspiring Adrian to run home and make the best catch he ever made playing rounders. In an exclusive interview after the game, Adrian admitted that he couldn’t let his better half out run him or out catch him.

Kevin’s now sit second in the group and we are due to play Na Piarsaigh of Limerick on Sunday 3rd July at home in Loreto. Pop up for a look and you’ll also get to see our cool new GAA Rounders jerseys! The Intermediate Mixed group tables can be viewed here.