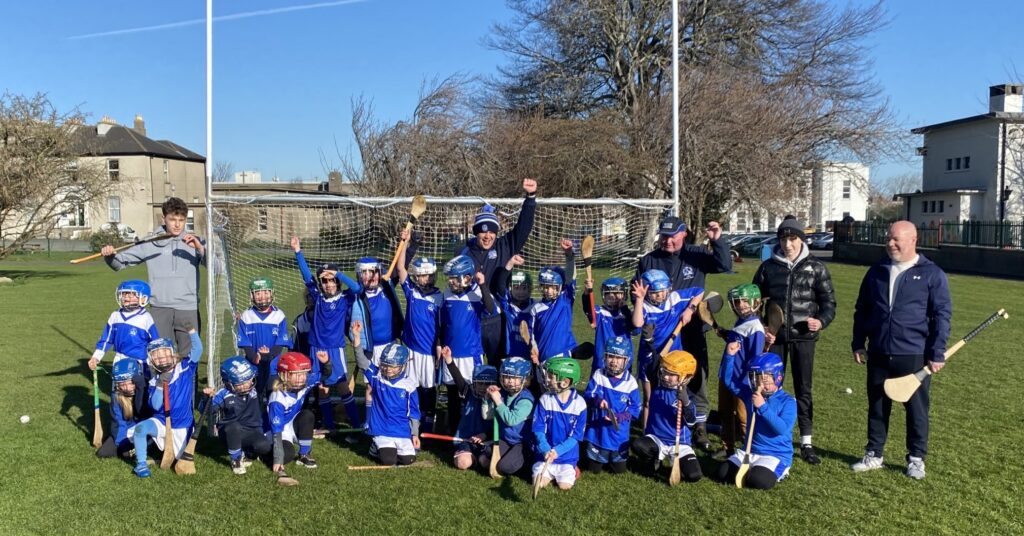 Saturday was a busy day with lots of Kevins squads returning to action. It was great to be back in action and even better to see such good weather as we celebrate 120 years on the go! In addition to our Kevins Heroes and Donore Credit Union ABC Nursery, our Under 8 and 9s also hosted Kilmacud Crokes and Ballyboden Saint Enda’s in Loreto College with both squads putting in strong performances. It was the Under 8s debut in Go Games and we would like to thank GPO Paul McManus and Anthony Morgan for preparing this group.

Our Irish & Cultural Officer Orla Jacobs was in attendance at the Donore Credit Union ABC Nursery handing our stickers to kids who spoke a bit of cupla focal and some flyers to the parents with some GAA Phrases. The stickers were a huge hit. We’ve also been tweeting phrases as gaeilge to encourage parents and kids to use the language during games.

Our Under 10s hosted Cabinteely in Dolphin Park and our Under 11s travelled to Castleknock.  We are fielding 2 Under 12 squads this year. Our Cusack group travelled to Castleknock, while our Davin squad hosted Erin’s Isle in Dolphin Park. Both sides put in good performance sand came away with the win. Our Under 11 Camogie squad travelled to Donnybrook Stadium to play Ranelagh Gaels in a challenge and our Under 15 Camogie hosted St Vincent’s in what was a step up for the since last seasons exploits. With space at a premium this weekend our Under 13 hurlers trained in Bushy Park. for more pictures of our Saturday teams check out our Instagram page.

On Sunday our Intermediate Camogie squad lost to Kilmacud Crokes, but our Under 13 camogie squad put in a strong performance beating Naomh Mearnog in what was their 1st ever 15 aside game. Our Under 19 hurlers received a walkover from Skerries Harps and our Under 17 hurlers welcomed Raheny to Dolphin Park in what ended in a close battle. Unfortunately for Kevins the visitors ran out 1-10 to 1-7 winners.

Adult Social Rounders squad met in Loreto for some final practice before the inaugural Dublin Winter League final. That game is to be played at 2 pm in Tymon Park. All support is welcome.

If you have any good photos from the week-end,  would like to write a match report, or get involved with our PRO team, please email pro.kevins.dublin@gaa.ie.