Week-End Round Up 7th November 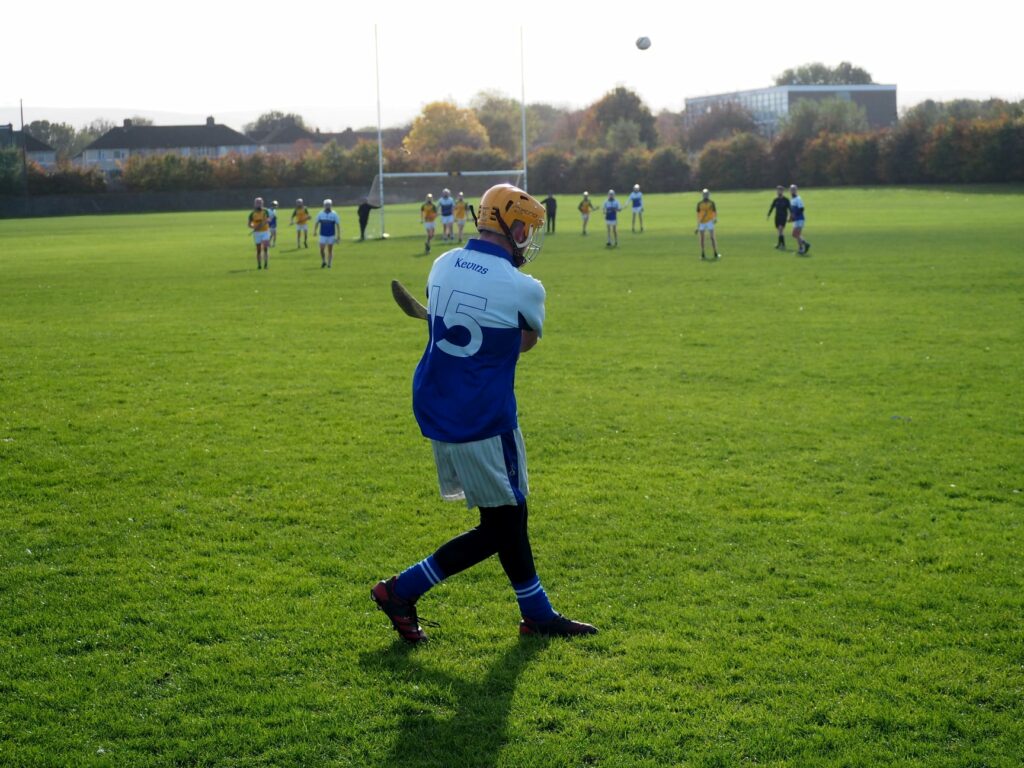 It was another action packed week-end. Our Under 14 girls brought their championship winning cup to Loreto College on Saturday morning and the Donore Credit Union ABC Nursery u7s played their first game against neighbours Good Counsel. Our sponsors in Donore Avenue Credit Union also paid a visit to Loreto College.

There was also an announcement of a big Healthy Club raffle on December 4th.  Tickets can be earned by walking scooting, or cycling to training every Saturday and there are some top prizes to be won.

It was the last week of Go Games and our Under 8s hosted Kilmacud Crokes in a windy Dolphin Park in what turned out to be a great spectacle of hurling. This is their first year of “competition” and they certainly didn’t disappoint with their teak tough, but skilful brand of hurling. The rest of our teams were playing away in their last game with the under 9s travelling to Na Gaeil Oga and both the 10s and 11s playing Ballyboden Saint Enda’s. All teams put in strong performances on their travels and the future  of hurling in the south inner city is certainly looking bright.

Our under 12s were playing neighbours Crumlin in a crucial league tie. Kevin’s were down by 1 point with 10 minutes to go and with 3 point blank shots been saved early, the game was very much in the mix. However, Crumlin managed to get a scrappy goal and gain momentum. The game ended 5-3 to 2-2 and it was the under 12s first loss of the season. For more on the under 12 tables you can find their progress here.

Our adult social rounders squad welcomed Na Fianna to Loreto in their 2nd game of the Dublin Social Rounders Winter League. Kevin’s have never beaten Na Fianna in competition and it wasn’t looking too good for them going into the 3rd innings as they trailed 8-2. However, with some good fielding and a reduction in running errors that plagued Kevin’s early on, the home side pulled back a few runs. By the top of the 5th it was 10-8 to the northsiders, who were up 1st to bat. Kevin’s got two quick outs, but with runners on base and top batsman Ronan Gately stepping up to the plate the game was far from over. Ronan had taunted the Kevin’s fielders all day with his tactical batting and his high ball to right outfield was looking like it was going to trouble us once again, that was until Fergal Kelly chased it down and caught him out with an amazing sliding catch. It was still 10-8, but Kevin’s were up to bat and despite trailing all the way through the game their confidence was up. Liz McMahon snook onto 1st base in somewhat controversial circumstances. This was followed by Fern Daly, but unfortunately Liz was caught out on 2nd. With one out, Dáithi Ó hAoláin then stepped up and secured a base, nudging Fern forward to 2nd. A good hit from Erica Meslin moved everyone forward once again and with the bases loaded big hitter Aidan Lynskey got Fern home for her 1st run of the day. The final honour was left to Fergal Kelly as he secured the win get Dáithi and Erica home to win by 1 run. Kevin’s are unbeaten after 2 games in the league and hope to squeeze in another game before Christmas, but the big statistic of the day is that Liz McMahon remains the only member of Kevin’s never to loose a game in it’s 119 year history. Liz’s daughter  is under 7 this year and no doubt her lucky charms will be in high demand on the camogie field. For some pictures of Saturday’s action click here to access our Instagram page.

The big game of the week-end was undoubtedly the Minor Hurling Championship Semi-Final against Faughs. Kevin’s had home advantage, but there was a strong cross win blowing which caused problems for both sides. It was a low scoring affair with most scores coming from frees. Kevin’s were boosted by the return from injury of Dean McKeever in goal. They started slowly again and were 3 points to 1 down when a long distance free from Dan O’Loughlin ended up in the back of the net which was helped in by Luke Ahern. Kevin’s maintained a narrow lead until the 2nd half when Faughs drew level, but it was Eoin Tracy’s free taking that won the game as he scored 6 points from placed balls. Kevin’s eventually came out victors on a score line of 1-7 to 0-7 and will meet Clan na Gael in the final in 2 weeks time. This will be Kevin’s first minor championship final in 13 years, so all support will be welcome. For some pictures of todays game click here to access our Instagram page.

Our Under 16 camogie squad were also in action and needed to win to qualify for the next round. The opposition was St Olaf’s who had home advantage in Sandyford. Kevin’s started well and fought hard throughout the game, but the Sandyford side were to strong for us on the day winning out 5-5 to 1-3. This placed Kevin’s in 4th place just outside the qualifying spot and ended the season at under 16 level. A big thanks to Claire Graham and Paul Ryan who took charge of this team throughout the year. However, a number of these girls will be playing minor championship this year, so their season is not over. In other news the under 14 hurlers also played Whitehall Colmcilles in a friendly coming out on top.

Finally we would like to congratulate our Intermediate Camogie coach James Murphy on his appointment as Dublin selector.