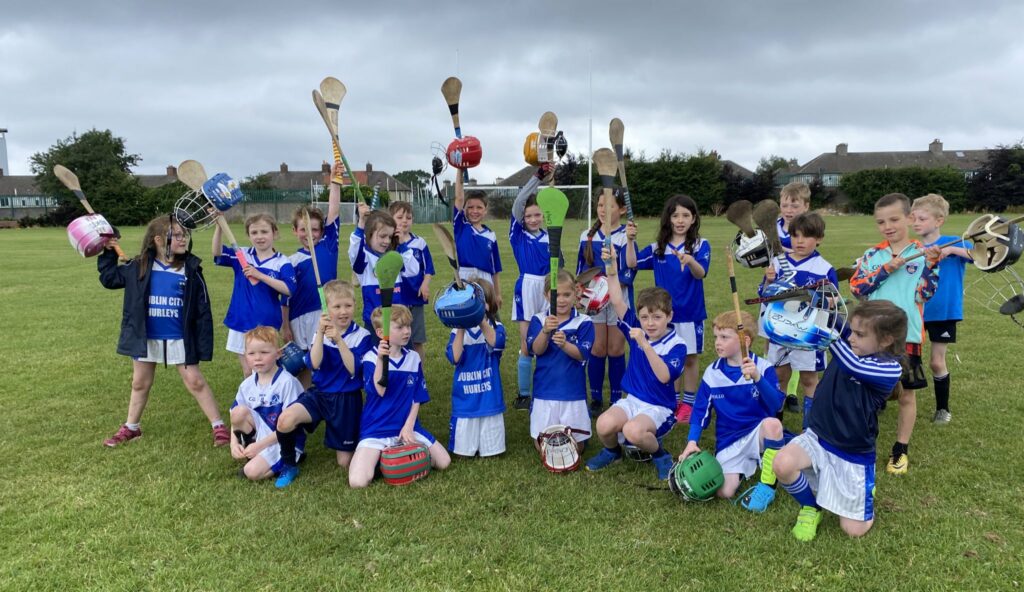 It was another busy week-end for the club which seems to be growing every week. On Friday night the recently formed Ladies Rounders team participated in the first ever Dublin Social Rounders Ladies blitz and won it! The team was led by Erica Meslin. Originally from California, Erica joined the club in 2019 after been persuaded by a Mayo man to sign up. She has secretly revealed that she is learning Irish so she can make a speech as gaeilge when they win the All-Ireland in 2022. The team is made up of a combination of parents who signed up for a bit of craic, some locals and others who tracked us down as they wanted to re-ignite their rounders career. The girls travelled to Rush in North County Dublin to play under lights and the hour and half round trip paid off though as the girls went unbeaten and won the tournament. An interesting statistic is that they are the only unbeaten team in the club this year… although the ninjas might disagree.

Saturday morning in Loreto College was very busy with the Heroes and Donore Credit Union ABC Nursery. Most of our teams were either playing in Dolphin Park or away, but due to the increased activity, our under 9’s welcomed Kilmacud Crokes to Loreto. Our under 8 hurlers travelled to play St Anne’s in Bohernabreena and were delighted to reach a new milestone with Fred Macklin and Matthew McGlade scoring the teams first points of the Go Games. We also had a few narrow misses, as sliothars dropped underneath the cross bars out in St. Annes. They later bumped into a young lady coaching the St. Anne’s under 9’s. Louise Cahill was one of the first girls to line out for Kevin’s camogie in 1993 and like a number of the current under 8’s also hurled with the boys. It’s always great to see the Kevin’s diaspora spreading the gospel. In other Go Games news the under 10 and 11 hurlers welcomed Lucan Sarsfields and St Sylvesters to Dolphin Park and the under 12 girls also hosted Naomh Padraig. The under 10 girls travelled to play St Kevin’s / Killian’s where they were commended by their opponents manager.

The under 12 hurlers travelled to Maypark where they had a good win against Craobh Chiarain making it 3 from 3. They are slowly creeping up the table ahead of teams who have played more games than them, but the big challenge will be on 6th November when they take on neighbours Crumlin who are unbeaten in 7 games. Unfortunately, the under 16 hurlers season came to an end after been defeated by Naomh Barrog in the Shield quarter-final. This squad has shown great promise over the past few years and we look forward seeing them progress to Minor next year. no doubt, some of them will progress onto the adult squads in the near future too.

Sunday started with a strong performance once again by our under 8 camogie ninjas! Spurned on by the ninjas, Coach Jenny rushed back to Dolphin Park to play in and win a thrilling Intermediate Cup Final. Kevin’s were down 5 points at half time and it wasn’t looking good. However, the girls put on a mighty fight back and piped St Olaf’s in the end. No doubt, playing in Dolphin Park was worth a few points as well and some tears of joy were shed during the celebrations. Coach Jenny was last seen on Camden Street, signing autographs for a young hurler from Wexford called Lee Chin.

The under 14 camógs kept up their good run this season by beating Ballyboden St Enda’s in their championship semi-final. Our under 16 camógs lost their championship tie by a small margin, but with one more game in the group stages it’s all to play for.

The Junior C hurlers season came to an end in the quarter finals of their championship as we were beaten by a strong Faughs side in Tymon North. There was a big turnout from the Village in the City for this game, as we said a sad and emotional farewell to the legendary Brendan ‘Big Horn’ Lynch. Brendan has captained the junior hurlers for a number of years and his his presence and leadership will be dearly missed. However, we wish him the best of luck, as he moves to Waterford with his family and joins the Kevin’s diaspora.