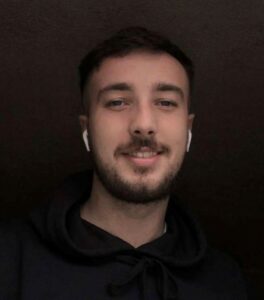 Desmond (Junior) is a lifelong member of the club who started out in the Franner hurling academy. More commonly known as Dessie or DJ, he broke onto the Intermediate hurling team in recent years. While disappointed not to get the opportunity to play under 21 due to the COVID-19 restrictions, his best years are yet to come. We caught up with DJ to get some personal insights and views on his Kevin’s teammates.

Where are you from? I’m a local from Dolphin House in Dublin.

When and how did you first get involved with Kevin’s? Can you remember your first experience? I started playing with the school when I was in 3rd class. Mr. Burke was looking after the hurling in the school and Macker used to come in and coach us during PE classes. I went up to Dolphin Park one Saturday morning and there was a match on. Claire Graham was the manager and I was late. She gave me a run in the forwards for the last 10 minutes but I don’t think I even touched the ball. I do remember someone standing on me and I nearly started crying. In fairness I was only 8 years old. But I went to bed early the following Friday, arrived on time for the next game and re-started my career in goal.

An interesting fact about yourself (or one that people are not likely to believe): I like playing chess and played competitive when I was in both primary and secondary school.

Do you play other sports? Yes, I play soccer with Rialto F.C. and Gaelic Football with Saint James Gaels.

Biggest sporting achievement to date: I’ve won a bit in my time, but playing in Gaelic Park in New York with Kevin’s in 2017 was big for me. It was only a friendly game, but the experience was deadly.

What position do you play/ What’s your favourite position? I play anywhere, but my favourite position is in defence, or in goal. I’m the sub-keeper on the Intermediate squad. I get to play in goal when Mannix is injured and in fairness to Mannix he gives me regular opportunities to stand between the posts.

Club honours: I won the Dolphin Cup 3 times when I was in Francis St. We were beaten in the 2014 Feile na nGael final by a point and won a few league titles at u15 and 16 when we were Rialto Gaels. I won a Feile na nGael in 2013 with Kevin’s. We’d a great team that year with the Comerford’s, the Mowlds and of course myself. I was also on the squad that won the Leinster League in 2017, but I was dropped for the final, so being awarded Young player of the year in 2017 has been the biggest club honour to date.

What do you enjoy most about your involvement in the club? The club is very welcoming and the older lads give young lads like myself great encouragement. When I was a young, the senior hurlers would always say hello and show interest in the younger players. It’s the same off the pitch. Lads are always willing to help you out in work and it was Brian Flannery that put a word in for me that got me the apprenticeship.

Biggest Club Legend: I never saw him play in his prime, but I was lucky enough to play with Sean O’Shea when he was hurling in goals with the juniors and I was coming onto the team. I had heard from the older lads about how good he was and how he hurled under 21 and senior with the Dubs. He helped me a lot by teaching me goalkeeping tips and other bits of advice. I was a bit of a hot head, so having a calming figure like Sean step in before I did anything stupid really helped at the time. I kept him busy!

Most dedicated club player: Cristian Kazadi. He’s not just a dedicated player, but a really dedicated clubman. He’d be out selling Christmas trees till 10 pm at night.

Biggest messer on the team: There’s always laughter when Sean Mooney’s about. He brings happiness wherever he goes.

Best night out with the club: Peggy Kelly’s after our Leinster League Final win.

Who has the last word before a game? Brian Óg Flannery (Captain) or Joey Mowlds (Vice-Captain)

Favourite opposition club player: Paul Jones (St Maur’s). I’ve been playing against him since I was underage and now at adult level. I have a habit of marking him a lot.

Best, or favourite game you have ever played in: We played Parnell’s in a league game. Parnell’s came back from 9 points and won a penalty in the last minute. A goal would have won it for them and they had the momentum, but I managed to save it. Thanks to Davey Kearns for picking the ball off the ground and giving the peno away, as I never would have picked it as my best game if I didn’t save the peno.

Favourite Quote: Live every day like it’s your last. I have it tattooed on my arm.